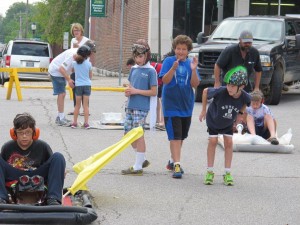 On Labor Day weekend we had our first public Shovercraft showing – what a great time for the kids!! A huge thanks to the Greencastle Farmer’s Market for their assistance. And for letting us shove the kids down Washington next to them while they were on Indiana Street downtown that Saturday. 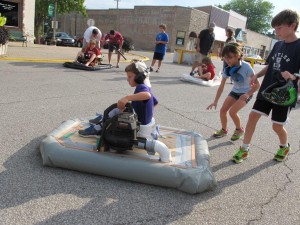 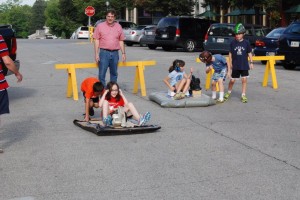 All of the craft hovered, some of them maybe a little too well if you look through the pictures! The kids loved it & the part I really enjoyed was the excitement seeing the kids helping each other and showing those walking by how their craft worked, even letting some of the other kids see what it was like to ride a leaf blower powered hovercraft.

There was a little on-the-spot fabrication work needed on some of the craft, part of the experience, but they worked remarkably well. I’m setting up a photo album of photos, but there’s also a lot of pictures on the Farmer’s Market page and a fair number of pictures and even a video on Facebook from some of the people there.

We even took one of the craft down to the Bloomington Makevention later in the day and did some runs in their parking lot. Not as far as the twinkie cannon that was going off near our launch point, but still another fun event. Bloominglabs Makevention was an incredible event by itself, I’ll post more information on that event later.

Next up for Castlemakers: Pumpkin projectiles. Well we actually have more in mind than that, maybe some hydroponics & RC/electronics projects are being tossed around. Show up for our next general club meeting (9/28 @1:30 pm in the Community Room above Eli’s Books downtown) and find out more!!