Raising questions and seeking answers can be great learning. When given a trash bag full incandescent holiday mini-lights last year, it raised the question “when one bulb burns out the string stays lit, but why do they all go out when you remove it?” That led to a lot of learning about holiday light strings and the bulbs they use, more than can be covered in this blog post!

And resulted in the topics for the last 2 months at  the Castlemakers Kids meetings. We started with simple electrical circuit diagrams, schematic components, and voltage/resistance in November. With a volt-ohm meter we were troubleshooting incandescent light strings pretty quickly. By December’s meeting we got into diodes and LED’s, along with Ohm’s law, to make our own LED lights for packages. And learned why lithium batteries can power an LED, but alkaline batteries can burn them out!

It’s safe to say everyone there learned something, including the adults. Few of the adults for example had heard of anti-fuse’s, one of the features of those small incandescent bulbs that let them burn out yet still keep the rest of the string lit. Who would have guessed that the piezo sparker from a butane candle lighter or gas grill could restore a burned out light string to identify the bad bulb? Too much to cover here, will try to write a longer blog post later detailing some of the experiments and what we found. In January’s meeting we’ll be continuing experimenting with LED’s and components – join us!

This one was a little too fun not to post. At our last Castlemakers Kids meeting we used a heat gun and a skull to shrink the plastic milk jugs. It also helps to have a wet sponge available to cool the plastic and prevent shrinkage from pulling the plastic back out of the eye sockets when cooling. Special thanks to JJL for the great skull to use!

Besides making milk jug skulls, the kids created ghostly looking limbs using plastic wrap & packing tape. We did made ghostly limbs several years ago; it’s still fun and even spookier with an LED inside at night. Need an extra hand? For now you can look in the Makerspace window… 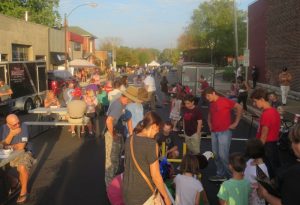 Our 3rd Annual Putt Putnam County, held on Main Street Greencastle’s October First Friday, became our largest yet. This year anyone in the area was encouraged to create/build a mini-golf hole for everyone to play. The end result: we ended up with a course that ran from Indiana Street down Franklin to Vine Street! 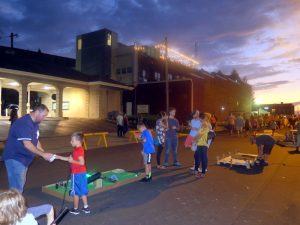 And of course the Castlemakers built holes were impressive as always with a Skee golf-ball hole,  mini-golf bowling alley, Horcrux hole, and a Candyland hole that had a chocolate river (maybe using chocolate pudding was a bad idea). But will cover those and the other mini-golf holes in a later post.

Special thanks to all the organizations that brought mini-golf holes and Main Street Greencastle for helping with the city to block off Franklin Street for us. It’s not too early to start thinking about an entry for the 4th Annual Putt Putnam County in October 2019!

Our 3rd Annual Putt Putnam County mini-golf hole building tournament is underway and the holes this year looking better than ever. With about a dozen mini-golf holes that I’m aware of, there’s still time to put together a quick hole for a night of family fun.

With entry holes from “Alice in Wonderland” to “Virtual Golf” it promises to be a fun, no charge event for the community. Come join us on October 5th!

For the June Castlemakers Kids meeting we built an emergency radio antenna out of coax cable.  Since it was ARRL’s Field Day, an annual ‘dust off the radios & get on the air’ event, we relocated our meeting to Putnam County’s Emergency Operations Center (EOC), where some local amateur radio operators were seeing how many radio contacts they could make. It also gave everyone a chance to see amateur radio operators making on air radio contacts and then try out the built antennas.

The design uses a short piece of coax cable with a connector on the end, you can see the instruction sheet we made and an example antenna. It’s a simple design that works quite well by cutting a different cable length for different transmission frequencies. Just strip the wire and twist the coax braid then you’re done. The antennas were then hooked up to a radio, and with a licensed radio operator supervision, they tried their antenna, some inside the building and others in the parking lot, to talk to each other.

Of course making antennas and watching radio operators ‘work the grid’ raised lots of questions. Thanks to George Edenfield (KB9RZK) and the rest of the PCAUXComm crew for hosting us. And special thanks to Dave Costin for giving us a behind the scenes tour of the Putnam County EOC – lot going on there many  don’t realize.

This last Sunday, for our first Castlemakers Kids meeting of the year, eight kids (and a few adults) learned about the electronic circuit called the “Joule Thief.” It’s a fun circuit that has gained some popularity in hacker circles, yet a lot of people don’t know about. Two factors make it a good kids project: The simplicity of the circuit and you don’t need to understand the electronics behind it. For inquiring minds it can challenging because it’s not immediately obvious how it works.

The name is based on getting extra energy (joules) out of dead batteries. Or at least batteries that most people think are dead. The circuit, with only 4 components, can use as little as .5 volts from a single dead cell AA battery and boost it up over 3 volts – more than enough to light up a white or blue LED. Even a brand new 1.5 volt AA battery won’t do that! For the more technically minded it’s a simple blocking oscillator (IMHO not an Armstrong since there’s no capacitor) that pulses higher voltage using a inductor, resistor, and a transistor.

There are lots of different ways to make the circuit, which turned out to be part of the fun. We tore apart computer power supplies to get the toroid coils, but also experimented using parts from burned out Compact Fluorescent Light (CFL) bulbs too. We found out the CFL parts worked great & possibly how we’ll do it in the future – although it can be tough to wind the toroid from some of the newer CFL bulbs. One future experiment – the Joule Thief circuit can charge dead rechargeable batteries, another great way to get energy out of supposedly dead batteries!