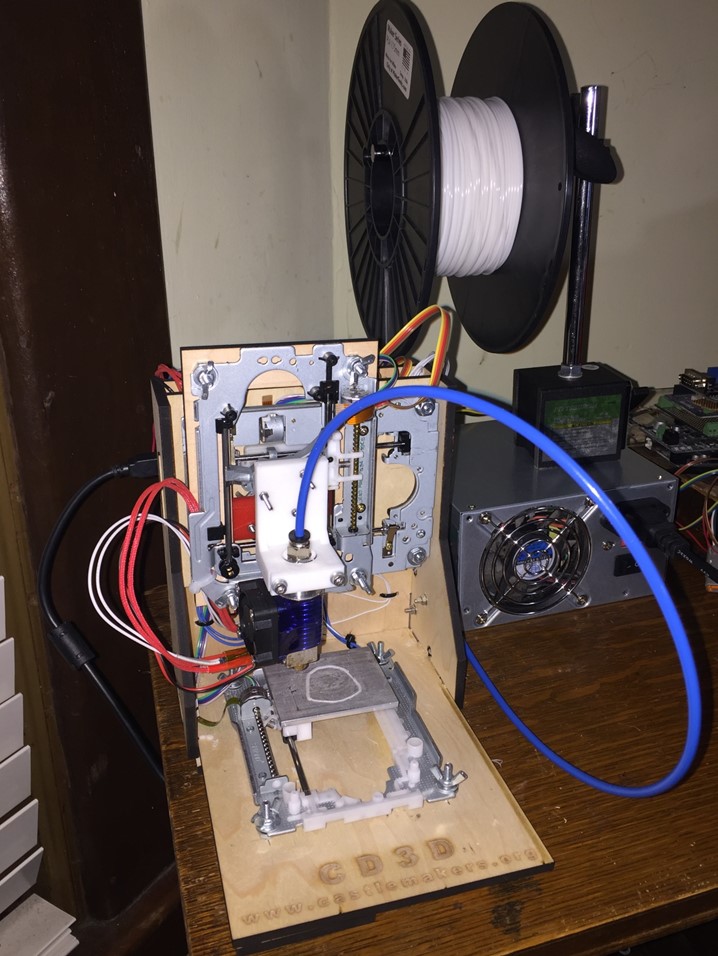 Greencastle Makerspace has a great selections of 3D printer options (https://castlemakers.org/about-us/equipment/) to allow members and interested members of the public to get hands on experience with this Fuse Deposition Modelling (FDM) additive manufacturing technique. With 3 actual printers to choose from it all with varying sizes and mechanical designs, one might think that as a member, there wouldn’t be much desire for anyone to roll their own. But sometimes as they say, sometimes it’s the journey not the destination that provides the most enjoyment: – or at least the most learning opportunity.

The other activity that has some momentum at the Makerspace in recent months is the addition of CNC capabilities. In addition to the Carbide 3D Nomad, and more recently the Carbide 3D Shapeoko XL, we were gifted a generic 3040 type desktop CNC/router.  (http://castlemakers.org/one-persons-trash/) This CNC had the disadvantage of requiring a legacy parallel port from a host computer. All though this could have been arranged, we felt that a better option was to retro fit it with a GRBL controller that has a number of advantages including being able to be used by any of the PCs at the Makerspace and not requiring any drivers of software that is getting progressively outdated. This exercise got me impressed with what has been achieved with open source Gcode parsers and machine controllers with cheap and ubiquitous embedded controllers such as the Arduino range of boards.

In conjunction with this, there seems to be an ever-increasing amount of outdated or superseded technology devices that end up in landfills or otherwise need to be dispose of or (hopefully) recycled/reclaimed to reduce potential environmental impacts.

With this a background in mind, I started wandering around google looking for options to use old commonly available electronic legacy components to create a 3D printer. What I discovered was a good number of examples of people using the head positioning systems from particular CDROM/DVD drives to successfully produce small print volume 3D printers. (To see some of these take a look at the links at the end of the post.) Using this as an inspiration, I decide that I’d get my hands on some DVD drives and see if what I had seen on the internet could be reproduce with minimal financial out lay. To this end I made a trip up to the attic, move the Christmas decorations, luggage and other various totes until I discovered a couple of PCs that had seen better days. A few minutes later I had a couple of potential DVD candidates in hand and returned to start the disassemble. What I found was a little disappointing. I was hoping to see some small 4 wire stepper motors combined with small carriage on rails carries the laser heads, all driven via a small diameter lead screw. What I found was the later models that used a standard (and no doubt cheaper) standard DC motors. 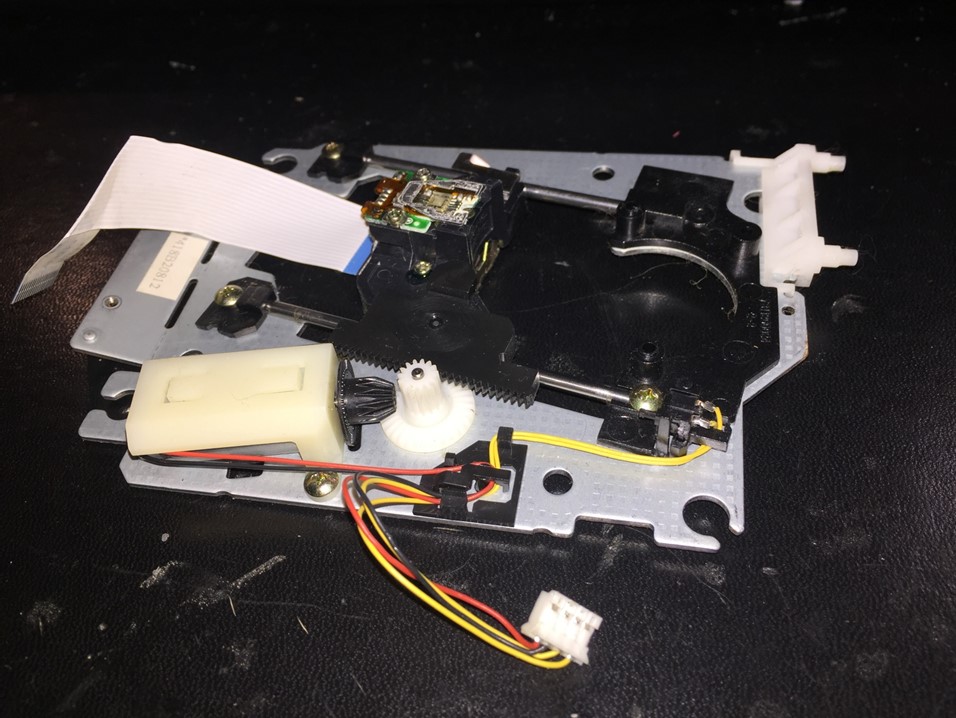 Back to the search.

A quick review of the computer hardware in the Makerspace, came up with 3 potential candidates and with the luck of the Makerspace, they all had stepper motor-based mechanisms. The basis of the 3-axis movement was in hand: – time to “glue” it together in some fashion.

In my Google travels I came across a design for a laser cut frame for this type of printer. Give the Voccell laser (https://castlemakers.org/about-us/equipment/ )is another one of the tools at the space I decided I’d make a couple of adjustments and press that laser into action to produce a plywood frame. 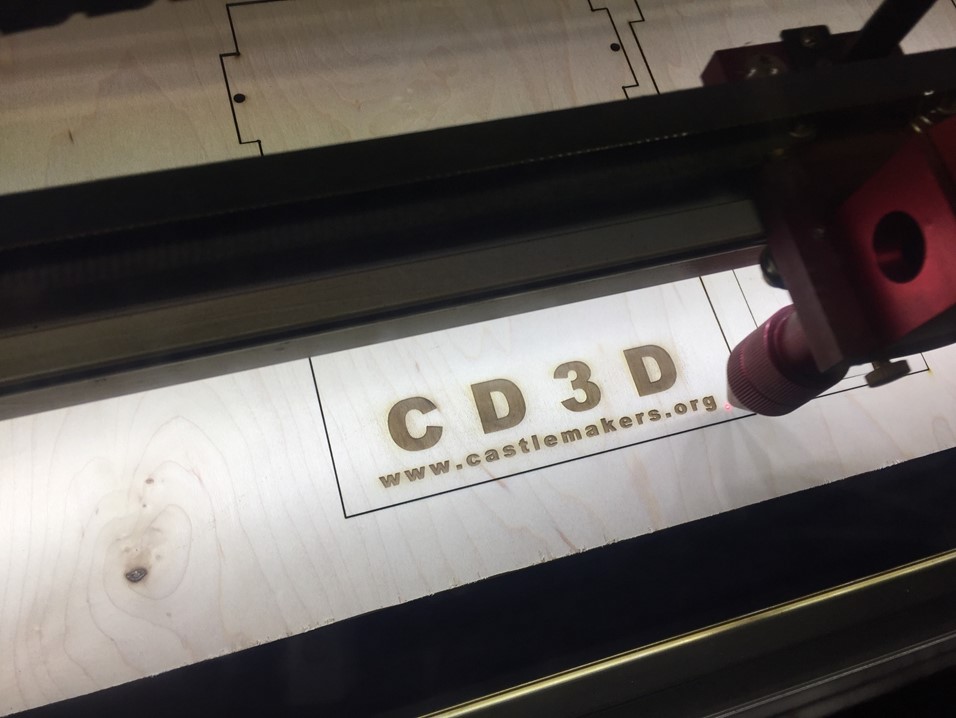 One of the key pieces of a FDM 3D printing process is the hotend mechanism to heat up and extrude the filament on the bed or build plate. Also to ensure the initials layers of filament stick to the bed, the use of heated bed is often used and allows printing materials that would otherwise be challenging to get to effectively adhere.

The examples I found online of printers built at this scale didn’t use a heated beds but rather focused on limiting the materials printed to those that would allow unheated beds like PLA. I thought it would be interesting to include bed heating to potentially allow using more varied material. A small scrap of 50mm x 50mm 1/8″ thick aluminium was used as the bed. 2 1 ohm 7W wire wound resistors were attached to the bottom of the bed with high temperature JB Weld. 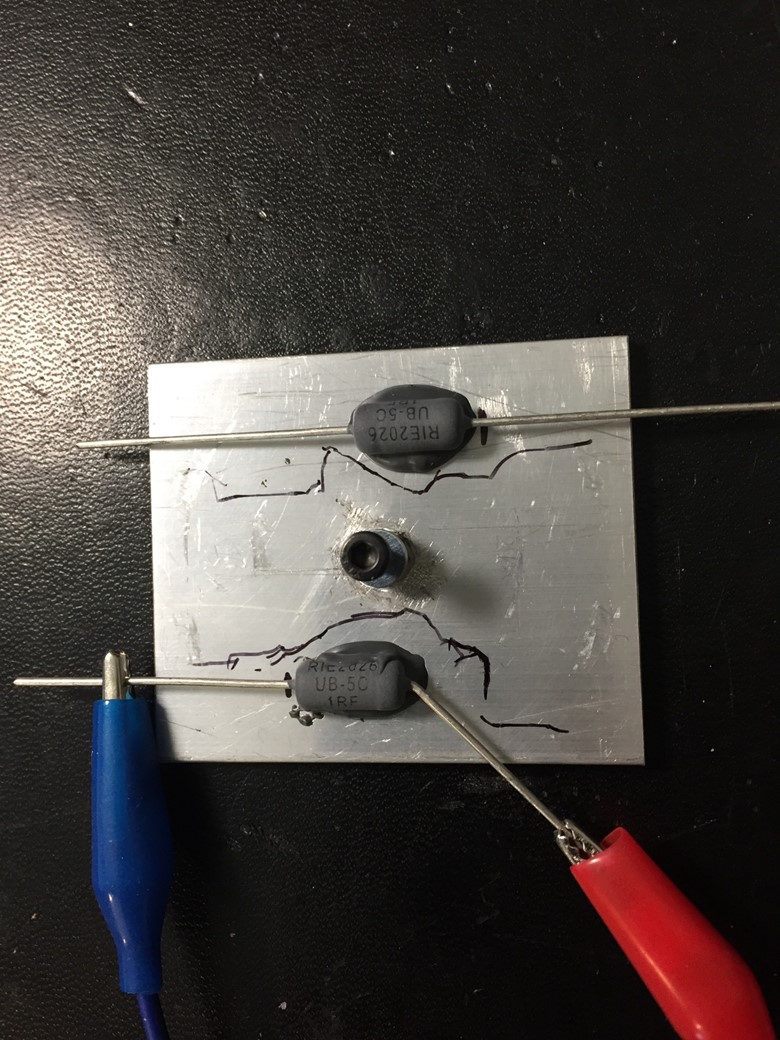 The resistors were connected in series and some tests run to see if the bed could be effectively heated with this arrangement. The tests were positive and this bed was attached to one of the DVD mechanisms in place of the laser head. 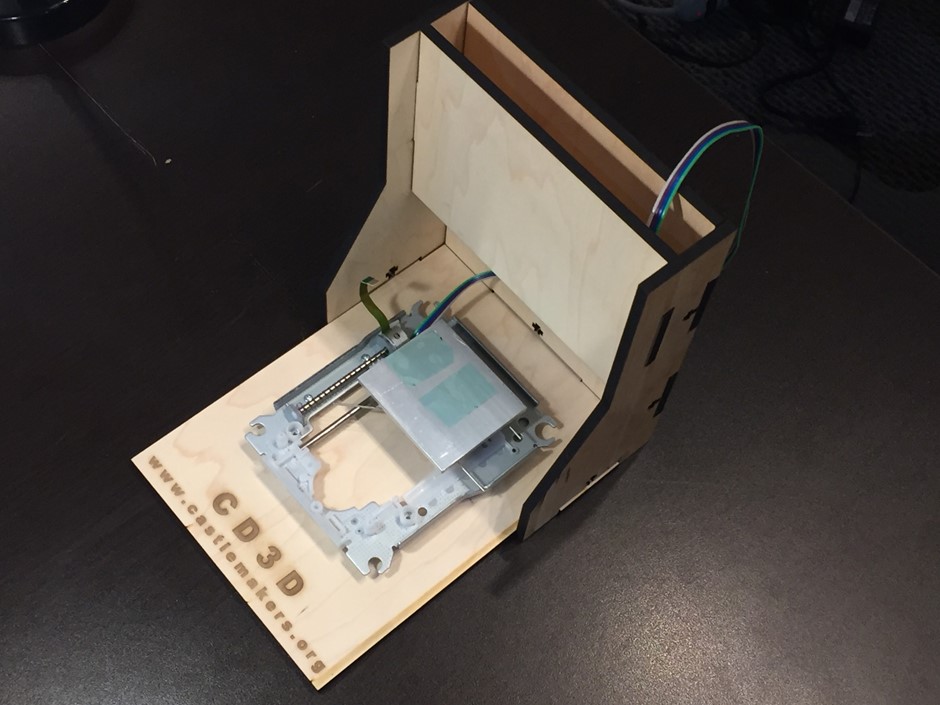 When looking at options for the hotend, it became clear that building a hotend from scratch, although fun (perhaps another blog post in the future) would probably not be within the spirit of keeping the over build time within realistic limits. As it turns out, eBay provides a large number of relatively cheap hotends with the necessary heater elements, temperature sensor, nozzle, cooling fans etc ready to go. I was able to purchase an E3D style hotend for under $10 shipped. I decide to go with this approach for now and leave the option to build my own for the future challenge. 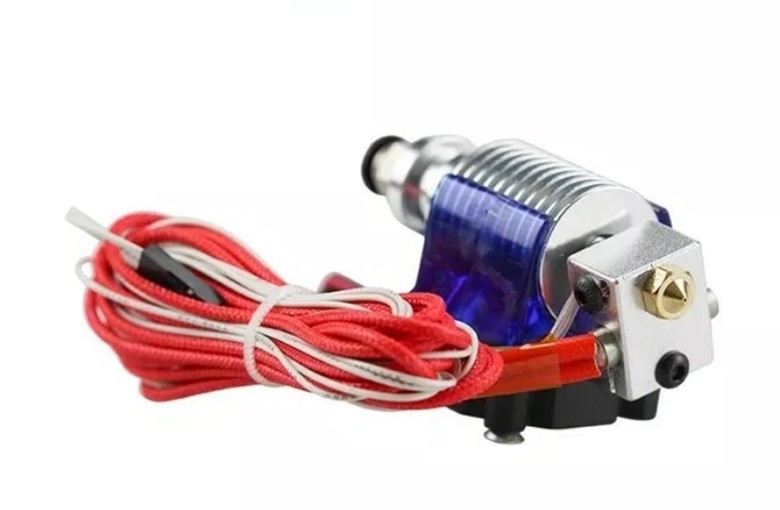 Because of the very small motors that make up the DVD mechanisms I estimated that they simply would not be able to carry the weight of a direct drive extruder so it was an easy decision to look at a remote extruder with a Bowden tube to guide the filament to the head. This also factored into the selection of the e3d hotend.

Having manually pushed filament into a hot extruder it was clear that more power would be needed from a motor than was available in a DVD drive.

The standard for the consumer class extruders is to use a nema17 standard motor of around the 1-2 amp phase current. Back before we had CDROMs there were 5-1/4″ floppy disk drives and they often used nema17 stepper motors to move the heads. It may be showing my age, but I did harvest a few of these motors before disposing of them. Unfortunately, they are of the unipolar variety rather than bipolar which most common current stepper driver electronics are set up to work with. It turns out these motors can be purchased on eBay for less than $10. As fortune would have it, an eBay seller known to the Makerspace has an online store and provide a number of parts with no shipping overhead. This included the aluminum extruder itself. All up the extruder, motor and pfte Bowden tube came it at ??? 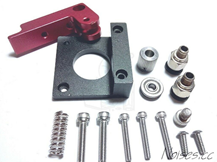 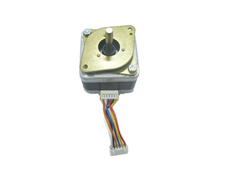