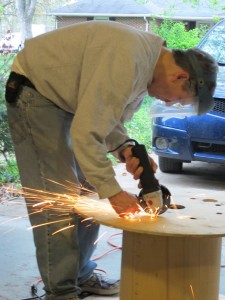 There’s software (Skanect & Reconstructme) that can be used with a Kinect’s input on a PC and can create 3D images/STL files if you are able to rotate the object. Since I already had a Kinect, decided to create this project based on the work of Fred Kahl (with some modifications). The first step to make a larger object 3D scanning system is creating the turntable, I’m hoping the Kinect initially can be put on a table to start using the software but eventually I’ll add a sliding rail system so taller objects can be scanned.

I’ll include some photos & comments below as we make the turntable.